To: My Member of Congress and/or Attorney General 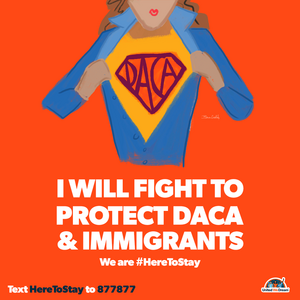 Publicly defend the Deferred Action for Childhood Arrivals program (DACA) from recent attacks with a statement about how it benefits your state.

Why is this important?

On June 29, 2017 Texas Attorney General Ken Paxton, along with 9 other Republican attorneys general from Alabama, Arkansas, Idaho, Kansas, Louisiana, Nebraska, South Carolina, Tennessee and West Virginia, as well as the Governor of Idaho, sent a letter to U.S. Attorney General Jeff Sessions calling for the Secretary of Homeland Security to phase out the Deferred Action for Childhood Arrivals (DACA). In their ultimatum to the Trump Administration, the attorneys general present two options: get rid of DACA or they will fight to destroy it in the courts.

The letter goes on to state that the Trump Administration has until September 5th, 2017 to begin the phase-out of DACA: halting the renewal and issuing of new DACA or expanded DACA permits and calling for an ultimate end to the program.

If the administration does not act on the letter’s demand, the attorneys general will expand the lawsuit they used to end DAPA (a sister program meant to protect Dreamers' parents and family members) to now add a challenge to DACA.

Recently, Luis Gutierrez met with Secretary of Homeland Security, General Kelly, and warned DACA and TPS recipients to prepare for the worst.

This is a serious threat for hundreds of thousands of young immigrants, and it will take all of us raising our voices together to begin to turn the tide.

DACA has allowed hundreds of thousands of qualified immigrant youth to gain legal protection, go to college, and support their families and communities. While Trump vowed he would leave Dreamers and DACA alone, a handful of states have now threatened to sue to try to end it themselves.

As a DACA recipient myself, I believe in our power when we stand together. The first step in this fight is to ask elected officials from every state to come out publicly defending -- instead of destroying -- DACA. They can use their power to make a strong case for why DACA is worth saving, but they need to hear from us that this is a critical priority.